Two special events were held in St. John’s – both to honor the ministries of the Sisters of Mercy.

It is coincidental that in the formalities of both events the song Standing on The Shoulders was sung.  The song reflects on the strength and courage of those whom we followed in life and ministry and recognized that we are the shoulders upon which others will stand as they go forward.

The Most Reverend Martin Currie, Archbishop of St. John’s, presided at a Mass at St. Patrick’s Mercy Home in the morning of this Week of Elder Care.  The celebration recognized the commitment of the Sisters of Mercy at the home for the past fifty-six years.

In her speech Sister Elizabeth Davis, Congregational Leader, described how the Sisters of Mercy responded to a vision of a former archbishop, P.J. Skinner, to establish a home for the elderly population by taking on the staffing and administration of the home.  She commended the dedicated staff and volunteers who worked with the sisters to provide the warmth and care that makes St. Patrick’s a “home”.

The music in the liturgy was lead by a group of women who were former students of the sisters at Holy Heart of Mary High School.

All were invited then to a lovely lunch and a celebration cake.

This is also big week for The Gathering Place.  The Gathering Place is a newly renovated and redeveloped community centre initiated by both the Presentation and Mercy Sisters in 1994 in response to the needs of the poor in the downtown area of the city.  In the beginning The Gathering Place was based in a vacant school building of the Sisters of Mercy and provided meals and time and space for social activities for the guests.  Various programs like literacy education, art, music, health and social services were added.  The Presentation Sisters were partners in the administration and coordination of this project.  The volunteer corps came from the various churches in the centre city area.

In 2012 a major financial campaign to renovate the building and to enhance the programs of the Gathering Place was undertaken with a goal of 7 million dollars.  At this date 6 million dollars have been raised through the hard work of the gift team and the generosity of people – thousands of dollars from  large multinational companies and a five dollar bill from a passer-by!

In the reconstruction phase basic services continued and were available through a nearby spirituality centre owned by the Presentation Sisters, The Lantern.  The life and the spirit of The Gathering Place continued in its temporary home until they moved home to the completely renovated space in late September.

Events of this week honored the guests, the founders, the volunteers, the donors, the media and the general public – all who are associated with The Gathering Place.

What a blessing for the poor and isolated of downtown St. John’s!

Sister Rosemary Ryan has been on the road these past few Sundays speaking before 16 Masses in 5 parish churches.  The reason for her presence was to explain the role of the Pontifical Mission Societies to the parishioners.

At the request of Archbishop Martin Currie she accepted the position of Diocesan Director for the Pontifical Mission Societies for the Archdiocese of St. John’s.

Sunday, Oct. 19, 2014, was Mission Sunday and the collection taken up was for the Missionary activity of the world.  Parishioners were asked to pray for the missions and to be generous with their donation. This collection is taken up in every Catholic Parish around the world, even in the developing countries, as we all have the responsibility for the missionary activity of the Church.

All monies collected must be sent to the Pontifical Mission Society for the benefit of the parishes in the developing countries.  Nothing can be kept for the needs of the home parish. 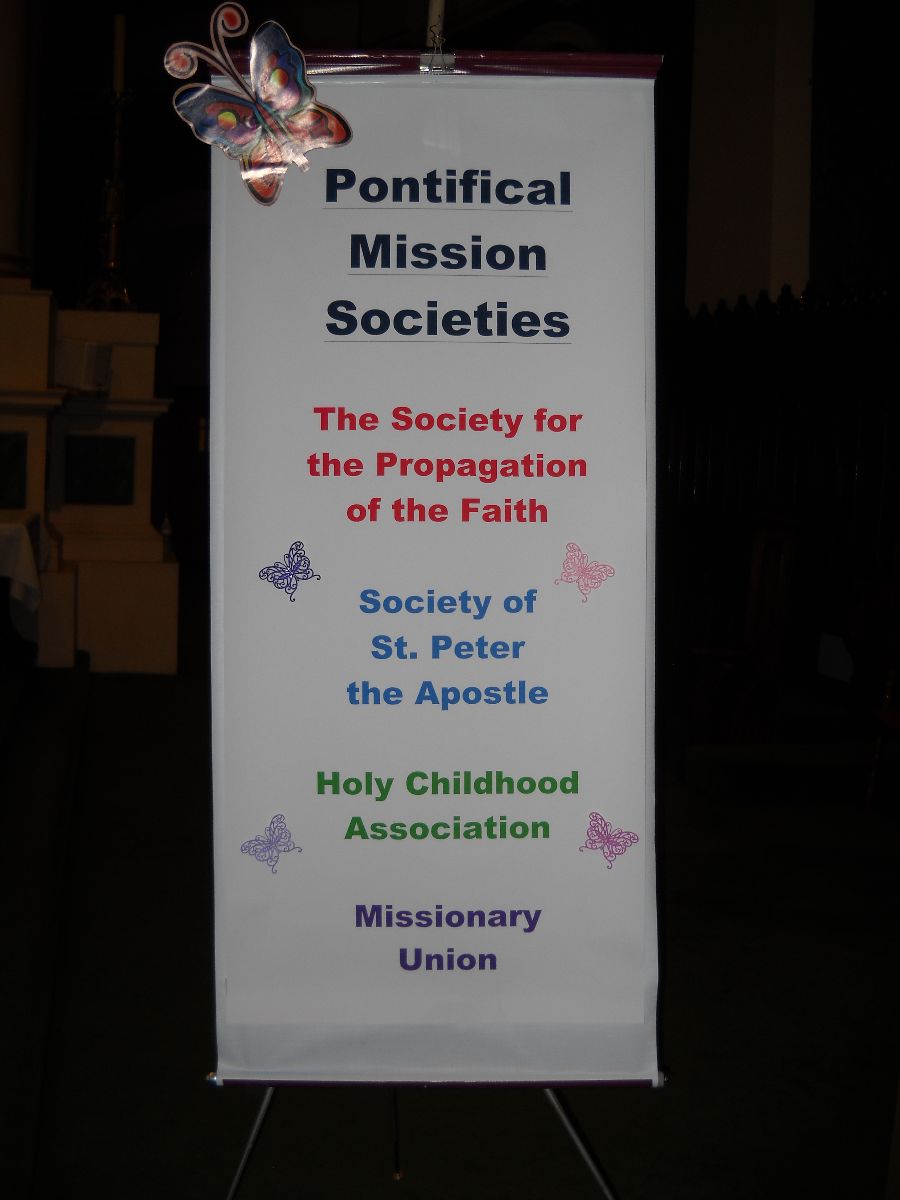 Monies donated by Canadian Dioceses are used to support projects in India and Africa while monies from some European countries are used in Latin America.  Rosemary compared the work of the Pontifical Mission Societies with the Sisters of Mercy missionary work in Peru.  So many of the projects being done in India and Africa are so similar with what is happening in Peru.

Praise was given for the generosity of the three Newfoundland Dioceses which contributed close to $30,000 last year.

Rosemary is willing to speak to any parish group or club to explain the work of the Pontifical Mission Societies.  She can be contacted at rryan@bellaliant.com or by phoning (709)753-8030

We welcome among us Ms. Anne Walsh from Australia via Dublin. Anne was instrumental along with Adele Howard for broadcasting the celebrations of the 20th Anniversary of Mercy International across the world through the mercyworld website.

Anne is the editor of Mercy e-news each week and will continue to produce that from right here in Newfoundland! Anne will be among us for two weeks until October 23 when she will return to her home in Melbourne. Anne has come to assist us in learning more about the world wide web and specifically about the Mercy world including our own website. We will have sessions that might have general appeal and provide basic information, as well as more technical workshops to help those who would like to learn how develop and to add articles to our website

We are delighted that Anne will be able to experience our beautiful history, culture and landscape and get to know the Sisters of Mercy of Newfoundland and Labrador. We know that we will gain more expertise in working in cyberspace and within the mercyworld website.

Anne at Cape Spear, the most easterly point in North America