The Sisters of Mercy of Newfoundland have been busy in preparation for the Rio + 20 meetings.  They were one of the Religious Congregations who influenced the Roman Catholic Leaders of Newfoundland and Labrador to produce a brochure giving information on the Rio Conference.

The Roman Catholic leaders meet twice a year to discuss various issues in their leadership. At the last meeting they decided to send a brochure to all of the parishes of this province of Canada giving information on Rio +20. This message “A Message from The Roman Catholic Bishops of Newfoundland and Labrador and the Leaders of Religious Congregations: Christian Brothers Community, Jesuit Community, Presentation Sisters, Redemptorist Community and Sisters of Mercy” is attached.

The Director of the Mercy Centre for Ecology and Justice in St Johns, Newfoundland sent the statement prepared through Mercy Global Action Network asking government representatives to advance an ethical and equitable global vision at Rio + 20 and sent also a letter to federal and provincial government party leaders,  seven federal elected representatives for Newfoundland and Labrador as well as to several other members of the provincial government one of whom has promised to present the statement and letter to the Conservative Caucus meeting .

On World Water Day the Sisters of Mercy as well as the Presentation Sisters sent letters to the Canadian Ambassador to the UN expressing grave concern about the position Canada was taking against water as a human right.

At various conferences including the Canadian Religious Conference and the Catholic Health Alliance of Canada,  Sisters of Mercy raised issues that needed to be supported by the Canadian government at Rio + 20.

” In Mercy, as Associates

We’re drawn into the circle.

In Mercy, our hearts are lifted

In the peace of God.

In Mercy, we learn to walk in

In Mercy, we strive to be

The face of hope for all.”

On May 21, 2012, praying in song and ritual, the Associates of Marystown welcomed four new members into their Circle of Mercy.  Sister Elizabeth Marrie, on behalf of the Leadership of the Sisters of Mercy, received the commitment of Donalda Cheeke, Annette Deveau, Hanna Lambe and Elizabeth Whelan. The new Associates received their Associate pins, Certificates and Mercy Associate candles and were warmly embraced by their Associate friends and their facilitator, Sister Theresa March.

In her opening address to the Associates, Sister Maureen O’Keefe noted that in 1993 the Marystown Associates under the leadership of Sister Margaret Pittman, were one of the first two groups to accept the invitation of the Sisters of Mercy to explore an Associate Relationship with the Mercy Congregation.  Like the first four sisters on the Marystown foundation in 1927, the Associates too began as a group of four. And like the sisters before  them, they have witnessed additions and departures over the years.

Today,  the group of fourteen dynamic women with Sister Theresa as their mentor proudly carry on the Mercy tradition of love and service to one another, their community and beyond.  The depth of their commitment and the sincerity of their affection for one another was evident in the sharing of stories that occurred over our traditional “good cup of tea” and copious goodies.

May the spirit of our founders Catherine McAuley, Francis Creedon and Antonio Egan continue to live in our Marystown Associates.  And may they continue to enrich their community with the fruits of God’s loving Mercy.

This year we celebrate 170 years of history and ministry of the Congregation of the Sisters of Mercy of Newfoundland.  We have a rich history of dedicated commitment in health care, education, social services and pastoral ministry on the island of Newfoundland, in Labrador, in Peru, in Ontario, Washington, Florida, Ireland and Africa. All of this ‘action’ is rooted in the ‘contemplative’ aspect of the Sisters’ lives, and especially in the lives of the elder Sisters, where they find their source of grace and energy. 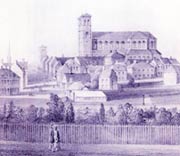 The story of the Congregation of the Sisters of Mercy of Newfoundland began when Bishop Michael Anthony Fleming traveled to Dublin, Ireland where he approached Catherine McAuley to request a community of Sisters of Mercy for his island mission. To facilitate his plan, the bishop agreed to send to the convent on Baggot Street a young lady to be trained as a Sister of Mercy so that she could return to Newfoundland and found a Convent of Mercy in St. John’s. The bishop’s choice for this important role was Marianne Creedon, a young Irish lady who had lived in St. John’s since 1833 and who was familiar with the needs of the mission. Catherine McAuley received Marianne Creedon into the novitiate at Baggot Street, and on August 19, 1841, Marianne, now Sister Mary Francis, was professed as a Sister of Mercy. Nine months later, on May 2, 1842, Sister Francis Creedon, accompanied by Sisters Ursula Frayne and Rose Lynch left St. Catherine’s Convent, Baggot Street, and crossed the Atlantic Ocean to form the first community of the Sisters of Mercy in the New World. They arrived in St. John’s, Newfoundland on June 3, 1842. This date marks the establishment of the Congregation of the Sisters of Mercy of Newfoundland.

During the first eleven months of the new mission, the Sisters of Mercy visited the sick and the poor in their homes. On December 12, 1842, the Sisters moved from their temporary home, the bishop’s residence, to their new convent on Military Road. This was the first Mercy Convent in the New World. On May 1, 1843, Our Lady of Mercy School, Military Road, was formally opened.