In the evening of Thursday, November 11, 1841, Catherine McAuley, the founder of the Sisters of Mercy, died of tuberculosis at the Convent of Mercy on Baggot Street, Dublin—the first of twelve convents she had established in the preceding decade. She was surrounded by members of the Baggot Street (editor: including sister Mary Francis Creedon), Booterstown, and Limerick communities, some of whom have left written eye-witness reports.  Mary Elizabeth Moore (1806-1868), superior of the convent in Limerick, wrote ten days after Catherine McAuley’s death to the superior of the Mercy convent in Tullamore (founded in 1836):

She died the Death of the Just. Cautious as she was from       bringing herself into notice unnecessarily in health she was still more so in sickness, waiting on herself even in her last agony, preserving to the last moment the same peace and serenity of mind which so eminently distinguished her through Life . . . . her first and last injunction to all was to preserve union and peace amongst each other . . . .

. . . . About five in the evening she asked for the candle to be placed in her hand.

When we thought the senses must be going and that it might be well to rouse attention by praying a little louder, she said: No occasion, my darling, to speak so loud, I hear distinctly. In this way she continued till 10 minutes before 8 when she calmly breathed her last sigh.

I did not think it possible for Human Nature to have such self-possession at the awful moment of Death but she had an extraordinary mind in Life and Death. (Letter to Mary Ann Doyle, 21 November 1841)

A Place of Pilgrimage: The Grave of Catherine McAuley

The earth grave in which the coffined body of Catherine McAuley was buried on November 15, 1841, is now sheltered by the small stone oratory built over the site in 1910     (Neumann, ed., Letters, 47). Of all the venues of pilgrimage at Mercy International Centre,

Catherine’s grave is the most frequented and the most profoundly reverenced. Here people stand, alone or in groups, in the early morning, during the day, or at twilight. Here they sense the presence of the God in whose providence Catherine McAuley had such great confidence. Here they sing hymns or pray silently or aloud in her spirit, sometimes using the words of her own “Suscipe”:

My God, I am Thine for all eternity; teach me to cast my whole self into the arms of Thy Providence with the most lively unlimited confidence in Thy compassionate tender pity.

Grant, O most Merciful Redeemer, that whatever Thou dost ordain or permit may always be acceptable to me; take from my heart all painful anxiety; suffer nothing to afflict me, but sin; nothing to delight me, but the hope of coming to the possession of Thee, my God, in Thy own everlasting Kingdom. Amen. (Limerick Manuscript)

In this spirit pilgrims to Catherine McAuley’s grave privately ask her to intercede for them and then confidently abandon their needs to God. Sometimes they leave flowers, candles, or handwritten notes; sometimes they take photographs. Always they depart with peace and gratitude for this experience. 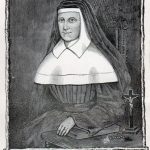