In Newfoundland we began the week of celebration of the 20th anniverary of the Mercy International Association on Sunday September 21. 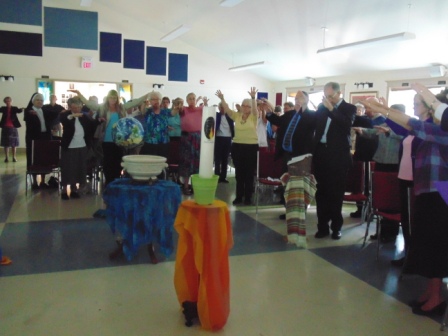 We began with the video Circle of Mercy thus bringing Sisters of Mercy from around the world into our gathering.   Sister Elizabeth Davis, congregational leader, welcomed the group giving a backdrop for the celebrations.  We enjoyed a slideshow of The Face of Mercy which included photos of many of the people in the room and which had been sent to Ireland to be part of the photo display during this week of celebration.

Sister Sheila O’Dea then led us through the liturgy that a committee had prepared for the celebrations at Baggot Street, Dublin on September 26.  The prayer was beautifully woven with readings, images, reflection and chants.  The refrains were written by some of our own sisters.  Bill Brennan, a well known local musician, had composed a piano piece, Country Rose, that was listened to as part of our reflection time. 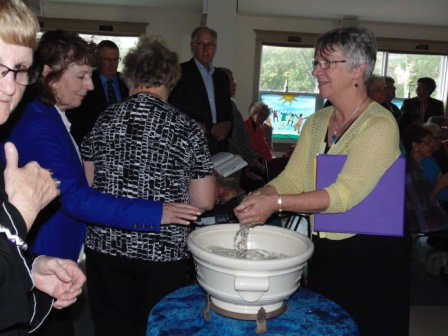 The theme of our liturgy was Caring for our Environment.  The opening action invited all of life from the four corners of creation to the centre of our room as we turned to each of the directions.  Various symbols were brought to the centre of the room.  Water was one of the key symbols, which was later blessed.  Each of us asked to approach the water prayerfully and playfully to bless ourself or others with the water.  At the end of the liturgy we each turned to the various directions to bless all people and creatures in our cosmos.

Of course we all enjoyed wonderful refreshments following the liturgy. 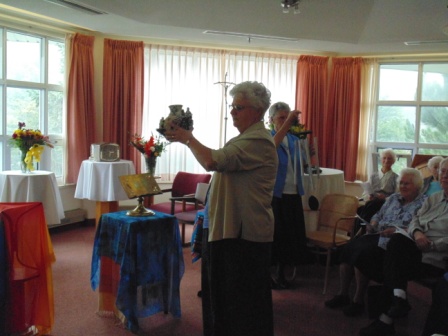 Since many of our sisters could not attend this gathering we celebrated the event at McAuley Convent on September 22.  We began in the chapel with the liturgy as prepared for the worldwide celebration.  It was so moving to see so many of the sister residents and staff of McAuley Convent participate in the various components of the service and to participate in the refrains.  We then had a “good cup of tea” before watching the slide show “the Face of Mercy”. 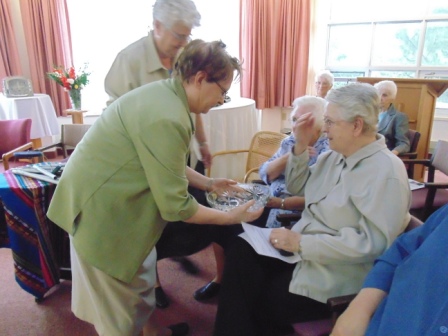 they were livestreamed from BaggotStreet chapel.  We were so pleased to be able to join in the celebrations “live”  through the world wide web, even thought some of them were in the early hours of the mornign for us.  We were so delighted that Sisters Patricia March and Monical Hickey as well as Anne Curtis, one of our colleagues, could be present among the group in Dublin for the celebrations and to represent us there.  We were so pleased to contribute to the celebrations on September 23 and to contribute to the liturgical celebration used on September 26.  We were especially pleased and excited when Patricia told the story of the formal opening of Mercy International Centre and are grateful to her deep love and commitment to Mercy.

We thank the committee who met often to prepare the litugical format and to carry out the various local celebrations.  We thank the sisters who worked to prepare to celebrate at home and to manage the technology that brought us into the chapel at Baggot Street!  We are especially grateful for the group who planned this international celebration of the twenty years of world wide Mercy.